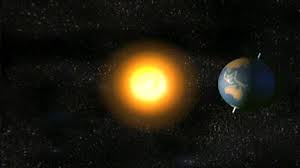 Follow Spirit, the way the Earth follows the Sun…
Revolving, revolving, eternally revolving around the light,
but measuring the distance of your circumsteller orbit,
lest you forsake the fountains of living waters.

Follow Spirit, the way the Earth follows the Sun…
Turning, turning, eternally turning upon your own axis
but gauging the duration of your days and nights,
lest you forsake the fountains of living waters.

Cycling between activity and rest,
All the facets of your life must face the light of day.
Languish too long in darkness, they wither from inattention.
Languish in too long sunshine, they wilt from over exposure.

Follow Spirit, the way the Earth follows the Sun…
Tilting, Tilting, eternally Tilting at your own dispositions
but metering the rhythm and reason of your seasons,
lest you forsake the fountains of living waters.

Inclining to the bent of your own character,
but alternating focus upon the hemispheres of your soul
for that which is left in shadow, becomes your shadow.
Balance is achieved in wheel of the year.

Follow Spirit, the way the Earth follows the Sun…
Revolve around the light in life-sustaining orbit.
Turn upon your axis, giving energy to all the facets of your life
Tilt towards the changing inclinations of your soul.
Establish your habitation upon the solar plane.

My other working title was: The Habitable Zone ~ which explains the recurring refrain about water…

In astronomy and astrobiology, the circumstellar habitable zone (CHZ) (or simply the habitable zone), colloquially known as the Goldilocks zone, is the region around a star within which planetary-mass objects with sufficient atmospheric pressure can support liquid water at their surfaces.[1][2] The bounds of the CHZ are calculated using the known requirements of Earth’s biosphere, its position in the Solar System and the amount of radiant energy it receives from the Sun. Due to the importance of liquid water to life as it exists on Earth, the nature of the CHZ and the objects within is believed to be instrumental in determining the scope and distribution of extraterrestrial life and intelligence.

2 thoughts on “The Way the Earth Follows the Sun…”