“The Latin name of the Turkey Vulture is Cathartes aura, which means “Golden Purifier” or “Purifying Breeze”

“The generic term Cathartes means “purifier” and is the Latinized form from the Greek kathartēs. The species name, aura, is Latinized from the Native Mexican word for the bird, auroura.”

“Cathartes is the Greek word for “purifier,” referring to these vultures’ role as “cleansers” that remove decomposing corpses in nature.”

“Although they have excellent vision, they are searching for the odor of a carcass with their highly developed sense of smell.

“They have been known to be able to smell carrion from over a mile away which is very unique in the bird world. The turkey vulture has the largest olfactory (smelling) system of all birds.”

“Turkey Vultures can eat the meat of animals that died of disease and not get sick themselves, because of special enzymes in their stomachs which destroy bacteria and viruses.”

“…its incredibly acidic stomach and powerful immune system keeps it safe from diseases that would kill other animals, diseases such as botulism, anthrax, salmonella, and e-coli.”

“Their droppings are disease-free.”

“Vultures have bare heads and often bare necks so that when they feed on rotting carcasses, bacteria and other parasites cannot burrow into their feathers to cause infections.”

“Considering what they eat, these are some of the cleanest animals around….Turkey Vultures often bathe in water. They constantly preen cleaning out their feathers with their bill.”

“Vultures urinate on their legs and feet to help cool off on hot days, and their urine also helps kill any bacteria or parasites they’ve picked up from walking through carcasses to help keep the birds healthier”

“Vultures display another odd bit of behavior in their perpetual battle against bacteria. They will frequently stand with their wings outstretched [in what is a called a “horaltic pose”]….In addition to warming the body and drying the wings, it is believed that the pose also helps kill bacteria by exposing it to sunlight.”

“If attacked, its primary form of defense is regurgitating.”

“Their defensive vomit is foul-smelling enough to drive away predators. If enemies approach too closely, the high amount of acid in the vomit is strong enough to burn them as well.”

“Seen on the wing, the Turkey Vulture is an awe-inspiring and graceful bird. Designed for soaring flight, with a nearly six-foot wing span and a light body weight, turkey vultures are able to buoyantly ride rising columns of warm air to heights of almost 5,000 feet and to travel up to 40 miles per hour.”

“…their days look like bliss, gliding for hours on end without a wingbeat, maintaining lift and stability at lower altitudes by canting their wings upward in a dihedral V, teetering left and right, then riding corkscrew thermal elevators to the penthouse without so much as the twitch of a muscle.

“Groups of perched vultures are called a wake. Imagine them mourning over something with their heads hung down.”

Metaphorically ~ People with Turkey Vulture Medicine possess a highly tuned sense of what is of death and not of life, and willingly take it into themselves; taking only what is dead, they purify the world around them, cleansing what could otherwise prove an emotional or energetic contagion to others.  They are protected in this endeavor, not subject to taking the contagion into their minds, and the contagion is destroyed as it passes through them.  Nonetheless, they must be ever mindful of cleansing themselves and immersing themselves in the Light.   Regrettably, if they feel threatened, they will spew whatever unprocessed contagion they have taken into themselves onto their perceived attacker.  They possess an inherent grace; far from being harbingers of death, they are Angels of Light.

“The term Sin-Eater refers to a person who, through ritual means, would take on the sins others.”

This was done so that the Individual Soul could be purified and reconciled to the Universal Spirit.

This tradition can be found in many cultures, including European and Meso-American.

“Tlazolteotl, the Aztec goddess of earth, motherhood and fertility, had a redemptive role in the religious practices of the Meso-American civilization. At the end of an individual’s life, he was allowed to confess his misdeeds to this deity, and according to legend she would cleanse his soul by “eating its filth”.”

In the Jewish tradition, there was the “Escape Goat” – in the celebration of their Day of Atonement, the sins of the community were placed upon a goat that was released into the desert, thus it “escaped”. It was considered the “remover of sin” or the “sender away of sins” – and is the origin of the term “scapegoat”.

In the story of Jesus of Nazareth, he became the “Scapegoat” in that he took the sins of others upon himself, in an act of atonement. Though he is called “The Lamb of God that takes away the sins of the world”.  Which to my mind, moving from the goat to the lamb, symbolizes the shift in emphasis from a legalistic to a heart-based spirituality.

It’s fascinating to observe that Jesus is immortalized in the same horalitc pose that Turkey Vultures strike to bathe in the Light.

If there are Sin Eaters in the world today, they have chosen a most difficult path, and they would do well to call upon, and emulate, the energies of the Turkey Vulture.

One does wonder what might befall such a person if they were unaware of their role and failed to cleanse themselves and to neutralize internally whatever they have naturally, though unconsciously, drawn into themselves.  Without sufficient spiritual transmutation, the contagion would thus build up within them, and they would lead tormented lives, presumably acting out and spreading the contagion when under duress. 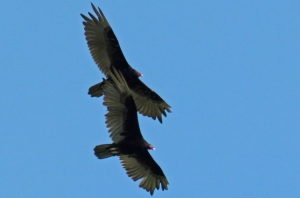 image at bottom from:
http://www.raptorrehab.org/vultures.html