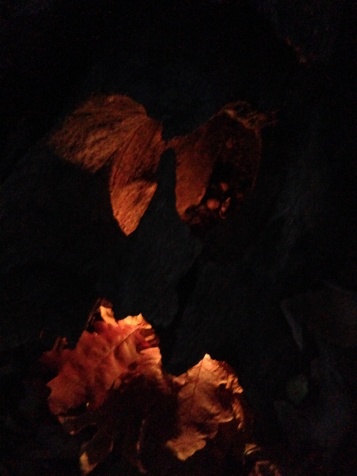 Upon this hallowed evening
the spirit of the growing season
undertakes its timely death
with the setting of the solemn sun
and thus creates, a thinning of the veil.

Within the twilight’s glimmering
and his passage gained admittance
Jack-of-the-Lantern passes
across the threshold of the spheres.

From the nether world of shadows
to this world of blood and flesh
attend his rustling footsteps
as he treads upon the corpses
of countless fallen leaves.

As deeper grows the darkness
his lantern burns the brighter
the Sin Eater beckons all
the living and the dead.

As loathsome ghoul reviled
glowing eyes and garish smile
oft mistaken for incarnate evil
a holy calling he bears instead.

A purger of sins unrepented
he gathers with his lantern
as moths they fly from withering souls
their guilt at last surrendered.

Upon himself he takes these burdens
the cardinal and the venial
then with the sacred star shine
eerie alchemy he works
and transmutes the dross of souls.

While we now tend to celebrate the Celtic Cross-Quarter day of Samhain with Halloween, the actual mid-point between the Autumnal Equinox and the Winter Solstice falls somewhere between the 5th and 7th of November, being November 7th this year.

http://www.archaeoastronomy.com/2014.html
“Cross-Quarter moments are interpolated as the midway points between the Solstices and Equinoxes measured in degrees along the ecliptic. Former NASA scientist Rollin Gillespie uses this spatial method rather than simply splitting in half the time interval between a Solstice and an Equinox.”

The term “will-o’-the-wisp” comes from “wisp”, a bundle of sticks or paper sometimes used as a torch, and the name “Will”: thus, “Will-of-the-torch”. The term jack-o’-lantern “Jack of [the] lantern” has a similar meaning.

A will-o’-the-wisp /ˌwɪl ə ðə ˈwɪsp/  are atmospheric ghost lights seen by travellers at night, especially over bogs, swamps or marshes. It resembles a flickering lamp and is said to recede if approached, drawing travellers from the safe paths. The phenomenon is known by a variety of names, including jack-o’-lantern, friars’s lantern, hinkypunk, and hobby lantern in English[1] folk belief, well attested in English folklore and in much of European folklore.

There are various explanations for the Will o’ the Wisps, the most general being that they are malevolent spirits either of the dead or non-human intelligence. They have a mischievous and often malevolent nature, luring unwary travellers into dangerous situations. Wirt Sikes in his book British Goblins alludes a common story about a Welsh Will o’ the Wisp (Pwca or Ellylldan); a peasant, who is travelling home late in the evening sees a bright light travelling before him, looking closer he sees that the light is a lantern held by a “dusky little figure” which he follows for several miles, suddenly he finds himself standing on the edge of a great chasm with a roaring torrent of water rushing below him. At that moment the lantern carrier leaps across the fissure, raises the light over its head and lets out a malicious laugh, after which it blows out the light leaving the unfortunate man far from home, standing in pitch darkness at the edge of a precipice. They were not always so dangerous, and there are tales told about the Will o’ the Wisp being guardians of treasure, leading those brave enough to follow them to sure riches.