The old-growth Hemlock forests of northern Wisconsin were logged off in the late 1800’s into the early 1900’s.

Eventually, as the stumps slowly rotted away, it left the roots of the Yellow Birch exposed.

And so they now stand, raised up from the earth on spidery legs, looking as though they might skitter through the forest on moonless nights, or perhaps dance under the full moon.

To see the roots of each other’s personality

providing insight into the their character 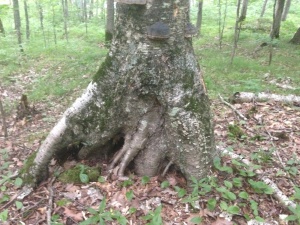 Two vestigal Hemlock Trees, growing where their ancestors once thrived and dominated the landscape.

[as always, click on the pictures for better images]